Your Mobile Phone Can Now Check Your Taxi Driver’s Honesty

TAXIcheck, the mobile taximeter, is now free for download for Symbian and Android smartphones. 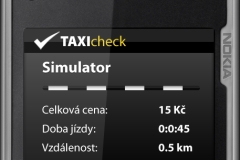 ET NETERA, a leading Czech provider of e-business solutions, working with the support of Nokia, has completed the development of the TAXIcheck smartphone app; a mobile taximeter. Anyone can now use this application to comfortably confirm the honesty of their taxi driver and whether the fare charged corresponds to the rate and the distance travelled. The application is currently available in Czech and English.

TAXIcheck is currently available for download free of charge at the OVI Store for Symbian-equipped Nokia phones and at the Android Market for Android smartphones. “Nokia’s Symbian platform and then Android were the logical first choices for us. We’re developing the application for the widest possible user base and in terms of the number of users, Symbian and Android are the majority,” Et netera a.s. Technical Director Pavel Pola said. "Supporting local developers is very important to our company and we see a great amount of added value in the TAXIcheck app for all those who use taxis, both here and abroad. We believe that not only in the Czech Republic, but practically all our users anywhere around the world will find this app useful,” Czech Republic and Slovakia Country Manager Petr Kasa said. Whether you’re in a taxi on your way home or somewhere abroad, TAXIcheck will prevent those unpleasant surprises at the end of the ride. TAXIcheck is available free of charge; it’s dependable; and it can work offline without accessing the internet or incurring expensive roaming charges; even without a SIM card. The application is easy to use and all trip histories can be saved and later displayed in Google Maps or a similar application. Users therefore can see the route of the taxi ride, whether it was the best route, and whether the fare was correct. Anyone who uses taxis, in the Czech Republic or anywhere abroad, is the target audience for this application. “Unfortunately, Prague is well-known for its dishonest taxi services by many from around the world who have visited our city. We’re convinced this application could help improve the city’s negative image among the great capitals of the world,” Pavel Pola said. How Does TAXIcheck Work?
The passenger starts TAXIcheck when entering the car and sets the taxi service’s rate (the initial fee, the per kilometer rate and the waiting charge). TAXIcheck, using satellite navigation, monitors the approximate fare during the ride. The application is also able to take into account so-called operational waiting charges, tunnels, etc. “The principle isn’t to check discrepancies in the tens of koruna, but in the tens of percent,” Pavel Pola added. In the future, TAXIcheck will also include CityPacks, which will include some basic tips and advice for a given city. It will also include a registry of official taxi services that can be used to order a car with an SMS. TAXIcheck’s CityPacks will therefore make travelling a more comfortable experience. Users will have a list of licensed services (with user ratings coming in the future), prices for typical trips (i.e. to the airport or to the center of the city), tips on how to deal with discrepancies, and other features.